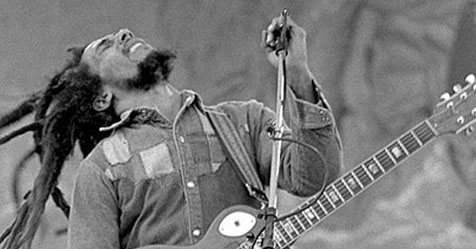 Jamaican singer and songwriter Bob Marley's unique blend of African rock and reggae music made him an international star - and few songs had more impact than his 1977 hit, Jammin'. It became a surprise UK dance floor-filler, introducing a new generation of young fans to his music.

It later became a symbol of peace and unity during a period of political unrest in Jamaica in 1978, when rivalry between the People's National Party and the Jamaica Labour Party had led to violence at rallies.

Marley and his band, The Wailers, had formed in 1963 in Trenchtown, after he and his old school friend, Neville 'Bunny' Livingston (better known as Bunny Wailer) recruited fellow musicians Junior Braithwaite, Beverley Kelso, Peter McIntosh and Cherry Smith to the band.

They played reggae, a genre with its roots in Nyabingi (the music of the Rastafari faith), which was a combination of gospel music and drumming. They enjoyed commercial success in Jamaica, achieving their first number one hit single in February 1964, with Simmer Down, but it wasn't until the 1970s that they broke into the UK market.

In spite of having released a multitude of singles since the formation of Bob Marley and the Wailers, none had charted in the UK for nine years, until they had a minor hit with I Shot the Sheriff in 1973, which peaked at number 67.

It was to be another two years before the band had their first UK top ten hit, No Woman No Cry, in 1975. The double A-sided single, Jammin' and Punky Reggae Party, released in 1977, was their second top ten UK chart success, reaching number nine in the singles chart.

At a time when disco music was one of the most popular genres in the UK, during what was recognised as the golden age of discotheques, Jammin' became an unexpected dance floor-filler in the nightclubs.

It was released from the album, Exodus, which went gold in the UK and eight-times platinum in Canada. The easy reggae beat was a welcome antidote to the high-tempo disco hits of the day.

In Jamaica, the word "jamming" refers to getting together for a celebration. Although it can also mean an impromptu musical session, Marley's lyrics refer to having a good time, especially through singing and dancing.

Initially, it was a celebration of good times and good music, but it took on a new meaning after Marley was shot in the chest in an assassination attempt in December 1976, following his appearance at former Jamaican Prime Minister Michael Manley's rally for the People's National Party.

He performed the song on 22nd April 1978 at the legendary One Love Peace Concert at the National Stadium in Kingston, Jamaica. He turned it into a symbol of hope to banish the scourge of political violence, after persuading rival political leaders Manley and Edward Seaga of the Jamaica Labour Party to join hands under the banner of Jah Rastafari.

In a symbolic gesture, Marley held up his hands to link with Seaga and Manley, symbolising unity. While doing so, he improvised the lyrics of Jammin' to include the words, "Show the people that you gonna unite," and "We're gonna make it right - we've got to unite."

The momentous occasion was one of the highlights of Marley's career, which was cut tragically short in 1981, following his death from cancer at the Cedars Of Lebanon Hospital in Miami.

His legacy has continued, with thousands of people across the world still having great love and admiration for his music. It's played all over the world to this day – especially in holiday destinations, where its feel-good vibe makes it a popular addition to any playlist.

The artist's children have also become popular entertainers in their own right, having inherited Marley's love of music and his talent. Ziggy Marley, aged 50, the son of Marley and his wife Rita, is lead vocalist in the band, Ziggy Marley and the Melody Makers. The couple's younger son, Stephen "Raggamuffin" Marley, 46, is a reggae singer who has won eight Grammy Awards.

Damian Marley, aged 40, the son of Bob Marley and his one-time girlfriend, Cindy Breakspeare, is also a reggae artist, whose fourth studio album, Stony Hill, was released in July 2017.

Here in the UK, plenty of people grow fruit cos they enjoy jammin’, with fruits such as blackberries, strawberries and raspberries being particularly popular.

Blackberries are hardy and enjoy a long harvest season, from June until the end of November, peaking in August. Make eight 340g jars of blackberry jam by picking 1.8kg of blackberries and adding 85ml of water, three tablespoons of lemon juice and 1.8kg of caster sugar.

Mix the blackberries, lemon juice and water in a pan and simmer gently over a low heat for between one and two hours, until the fruit is soft and pulpy. Mix in the sugar and bring to the boil, while stirring constantly. Test whether it's ready by dropping a little jam on to a cold plate. If you push it and it wrinkles, it's ready. Put the jam in jars and seal them immediately. Leave it to set properly, undisturbed in a dark place, for 24 hours.

When growing your own fruit, make sure the birds don't get to it first by protecting your crop with Henry Cowls' fruit cages and bird netting. Please contact us for information on our full range of products.

How can we help?

“I am very pleased with the cage, erected it on my own no problems. A good product at a competetive price, many thanks.”

Have a look at our useful guides on how to erect a Henry Cowls fruitcage.

Henry Cowls first set up business in Porthleven on the Cornish Lizard Peninsular in 1889 to produce nets for the huge Cornish fishing industry.